The week started out on Sunday the 18th with our annual FFA Prize Auction.  Members received the amount of money they sold for fruit sales in monopoly money and were able to purchase all sorts of cool prizes in an auction setting.  Mr. Dennis Kenning came in to auctioneer various items off like stocking hats, work gloves, hunting gloves, popcorn, cheese, beef sticks, slippers, and other awesome items.

Each day then there was a specific theme for the staff and students of the high school to show their FFA pride.  The theme for Monday was America Day as students were able to dress in their best American pride clothing.  Tuesday’s theme was FFA/Farm Shirt day as FFA members dressed in their grey and golden FFA shirts and the rest of the school wore their favorite farm shirt.  Wednesday’s theme was blue and gold/official dress day as FFA members dressed in official dress and were served pizza for lunch.  The rest of the school wore their best blue and gold clothing to represent the colors of FFA, which are National Blue and Corn Gold.  Thursday’s theme was redneck day as students dressed in redneck apparel for the day.  This was also the day for the annual FFA Ag Olympics convocation.

FFA members entertained the student body with multiple activities throughout the afternoon.  The first event of the day was Hungry Horse.  Six teams of two competed where balloons (the Feed) were in the middle of the court and each team had a scooter and a laundry basket to get all their feed in.  One team member was belly down on the scooter and one team member was pushing the feet of the other member (the horse.) The team who collected the most feed (balloons) in their basket won.

The second event was with six competitors and they matched up to see who made the best donkey noises and the third event was the egg roulette competition where six individuals competed against each other by hitting eggs over their head.  Each dozen of eggs had ten hard-boiled eggs in them and 2 raw eggs.  The first person to crack a raw egg over their opponents head lost and did not move onto the next round.

The fourth event was FFA Trivia.  Students were chosen at random to see who knew different questions about the National FFA Organization.

The fifth event of the day was the Hay Bale Relay where a team of four competed to claim the prize of best straw bale hauling team.

The sixth event was some farm jokes for the student body and the seventh event was the pig herding contest.  Six competitors were dressed up in overalls, farm hats, and also a pig herding panel.  Each competitor had to take their panel and try to herd the white balloons (the pigs)  into the designated barn in the corners of the gym.  Each competitor had two minutes to get as many pigs (balloons) into their barn as possible.

The eighth event of the day was name that country song where six individuals competed to name an older or current country song.  A small part of the song was played and the first person to write down the correct answer was the winner.

The ninth and final event of the 2018 Ag Olympics was the cow pie eating contest.  Each of the six contestants had to eat a cowpie (chocolate pudding) on their plate with only their hands mouth.  The catch to the contest was each member wore a nylon stocking over their head to eat their chocolatey cow pie.  This was a very fun but messy way to end the 2018 Agricultural Olympics.

Friday’s theme was Jeff Pride day as students wore their best crimson and gold apparel for the day.  The teacher’s appreciation breakfast was scheduled for Thursday morning but due to a late start we had to push our breakfast to Monday morning.

This was the day that the FFA members cooked breakfast for all of the teachers and staff of the Fairbury Public School District and also for any FFA Alumni/supporter.  Members of the FFA started cooking breakfast at 5:00am in the Ag Shop and fed over 60 people throughout the morning.  This is an annual tradition for the Fairbury FFA Chapter that the members enjoy doing because it helps them remember that being of service to others is the main focus of the National FFA Organization.

February 18th through the 26th was a very busy week for the Fairbury FFA members but all of them enjoyed the fun activities and experiences of the week. 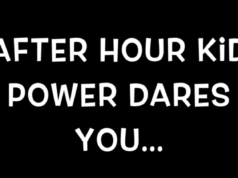 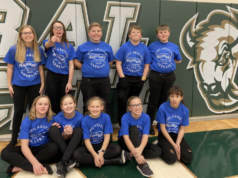 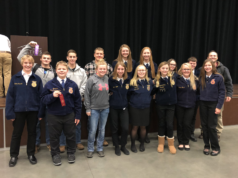